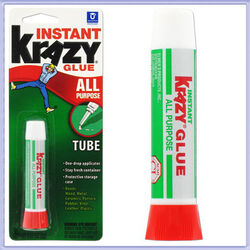 Super Glue or Krazy Glue is a popular type of glue made by several manufacturers such as Elmer's Products, Inc. It dries very quickly and creates a strong bond between most objects. Several brands are advertised as being clear. Super Glue is not recommended for jewelry, because the super glue can create a transparent film on anything it touches and also creates little bumps where the crafter accidently got it outside of where they meant to. It can withstand water, but not washing. Also, it's not flexible, which means anything that will be bending or twisting will break free eventually (like jewelry findings). Over time, the bond seems to degrade faster than that of glues like E6000 or a glue gun. Its biggest strength is the fast bond and strong bond on many objects, but it does leave traces.

Retrieved from "https://easycrafts.fandom.com/wiki/Super_Glue?oldid=5313"
Community content is available under CC-BY-SA unless otherwise noted.